Despite Misgivings, Scott Admin Will Participate on Climate Crisis Council 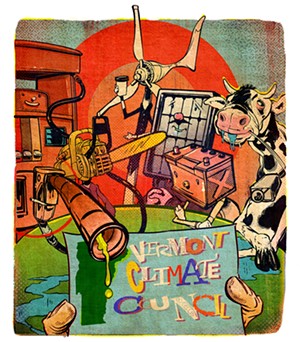 As environmental advocates and lawmakers rallied support in January for a bill to hold the state accountable for meeting its greenhouse gas emission goals, Gov. Phil Scott pushed back.

The Republican governor defended himself from sharp criticism that he wasn’t doing enough to combat the climate crisis. He highlighted state programs to help people weatherize homes and buy electric vehicles, and he proposed using future budget surpluses to boost spending on such programs.

But the notion that the state would give its citizens the right to sue should it miss distant emissions targets — a core component of the Global Warming Solutions Act — struck Scott as asinine. He also dismissed legislators’ call for a 21-member panel to draft a new comprehensive climate action plan.

Fast-forward 10 months, and that task force — now the 23-member Vermont Climate Council — is about to begin its work over the governor’s objections.

In June, lawmakers resoundingly passed H.688, the signature climate legislation of the past session. They overrode Scott’s veto in September.

Whether the new panel will be able to accomplish its mission in light of past opposition from Scott and members of his administration — eight of whom sit on the council — is a key question ahead of its first meeting on Friday, November 20.

The council’s chair, Secretary of Administration Susanne Young, acknowledged the challenge of leading the group after her boss sought to undermine its legitimacy as an “unelected and virtually unaccountable council.” The panel, which Young noted was “larger than one of our small departments,” is nevertheless planning to dig in and deliver the climate plan the law requires by December 1, 2021.

“There are very real concerns about the constitutionality of the structure, not the work that it’s doing,” Young said.

Can this panel accomplish more than a similar state commission empaneled just three years ago? Scott established the 21-member Vermont Climate Action Commission in 2017 to design a plan to reach the state’s goals for renewable energy and greenhouse gas emissions. The commission took public testimony, made 53 policy recommendations and disbanded after a year. Two of its members are on the new Climate Council.

“What worries me most is, the governor already put together a panel, and he ignored the vast majority of their recommendations,” said Lt. Gov. David Zuckerman, who sits on the Senate committee that appointed seven members of the new council.

Zuckerman said Scott’s “ineffective” record on climate, his critiques of the new Climate Council and his focus on COVID-19 make him wonder whether the administration will give this climate effort the attention it demands.

“The people that the House and Senate put on this panel are ready for action,” said Zuckerman, who lost his bid to unseat Scott earlier this month. “The question is, are his administrative appointees going to be directed to make this panel effective or for it to drag its heels?”

Administration officials say it’s the legislature’s job to pass laws and the executive branch’s to carry them out. Creating a council composed mostly of legislative appointees who have the power to pass a plan that state agencies will be required to follow crosses a line that is “unconstitutionally usurping the Executive Branch role,” Scott asserted in his veto message.

Sen. Chris Bray (D-Addison) said lawmakers closely reviewed the claims of unconstitutionality and found that they had no merit, calling them “legal nonsense.” He noted that both the Office of the Legislative Counsel and the attorney general found the law constitutional.

Young said she is optimistic the council can meet the objectives the legislature laid out for it. She praised the appointees as a “really dedicated, diverse group of individuals” and said Agency of Natural Resources staff are already pulling together detailed information that the group will need to tackle the task.

That task includes updating the comprehensive assessment of the state’s current greenhouse gas emissions. The panel must also evaluate the impact and cost-effectiveness of strategies to reduce those emissions, such as switching to electric cars and buses, and phasing out oil furnaces in favor of electric heat pumps or advanced wood burners.

If that weren’t enough, the members are also charged with devising strategies to “prepare the State’s communities, infrastructure, and economy to adapt to the current and anticipated effects of climate change,” the law states.

“We have a lot of work ahead of us,” Young acknowledged.

The panel includes leaders of key state departments addressing the climate crisis. Point people will likely be Julie Moore, secretary of the Agency of Natural Resources and clean water czar; Joe Flynn, secretary of the Agency of Transportation, a sector that accounts for 43 percent of the state’s emissions; and June Tierney, commissioner of the Department of Public Service, which employs the state’s energy experts and promotes advanced wood heating technologies.

Several of the 15 members appointed by the legislature have significant experience in climate science and carbon-reduction policies. Richard Cowart once chaired the Vermont Public Service Board and now runs the Regulatory Assistance Project, a nonprofit that helps governments and organizations around the world transition to renewable energy. Cowart helped lay the foundation for the establishment of the state’s energy efficiency utility, Efficiency Vermont, which estimates its programs have helped prevent 12 million tons of carbon emissions since 2000.

“We had some phenomenal applications, but Rich’s experience in Vermont, in other states and internationally set him apart,” said House Speaker Mitzi Johnson (D-South Hero), who said she considers the panel’s work part of her legislative legacy.

Another key player will likely be Jared Duval, the executive director of the Energy Action Network, a renewable energy advocacy group that tracks and reports on the state’s emission reduction efforts. Duval, the former economic development director of the Agency of Commerce and Community Development, said ditching fossil fuels in favor of local, renewable energy options presents a huge opportunity for the state.

Of the $2 billion per year Vermonters spend on gasoline and heating fuel, 75 percent goes overseas, representing a “$1.5 billion drain on the Vermont economy,” Duval said.

Those funds, if “reoriented” toward local low-carbon options, could bring about an energy transformation that would reap myriad benefits.

“I think the climate action plan has the potential to generate massive energy cost savings for Vermonters and to be the most significant economic development initiative for Vermont over the next decade,” Duval said.

While reducing the carbon footprint in the transportation and heating sectors will be difficult in a cold state that loves its pickup trucks, Duval said there is an important “silver lining.”

The state has already done a good job shifting its electric utilities to low-carbon sources such as solar, wind and hydroelectric. So now, whenever a Vermonter replaces a gas car or oil furnace with an electric alternative, the switch results in a larger net carbon emission reduction than it would elsewhere, he said.

Johanna Miller, energy and climate program director at the Vermont Natural Resources Council, said that while she has been frustrated by the state’s inaction to date, she’s going into the new effort with high hopes and an open mind.

“Finally, the State of Vermont is taking the climate crisis seriously,” Miller said.

While the state has been “dinking around with these issues for 15 years now,” Miller said, this council has some teeth.

The “accountability framework” baked into the law means that the Agency of Natural Resources will be required to adopt regulations in line with the Climate Council’s plan — and that citizens will be able to hold the state responsible by filing suit if those regulations aren’t getting the job done, Miller said.

Whatever policy proposals the council recommends, the state’s success in embracing a more environmental ethos will ultimately come down to education, said Sophia Clark, 17, the council’s youth member. She is acutely aware that her generation will be most affected by the climate crisis, and so it has an obligation to participate in the solutions.

While she knows the policy changes the council will be debating are vital, to her, the small choices that Vermonters make every day may prove just as important.

Whether it’s supporting local, regenerative agriculture; asking a local grocer to use less environmentally harmful refrigerant; riding a bicycle instead of driving; or just buying less junk, small changes can go a long way, she said.

“I think we need to look at small little things that we can change that can add up to big change,” Clark said.

Sign Up for the Newsletter or View Previous Editions

Please support our efforts to achieve Vermont's climate and energy commitments in ways that create a more just, thriving, and sustainable future for Vermonters.

Back to top
Close Offcanvas Sidebar